You may have heard of the “Teddy Boys”, one 1950s British subculture in which a younger generation of men rejected post-war austerity by donning Edwardian dress. If not then a cheeky Google will get you very well acquainted with the aesthetic they were aiming for. Generally we’re talking about tailor made jackets, fancy ties and rather dapper waistcoats; top this off with a variety of slicked back, or quiffed, hairstyles and we, my friends, must consider ourselves away.

I love it, good God how I love it. Surviving images bombard me with more black and white vintage stimulus than I can visually bear. It’s debonair, delightfully wasteful and needlessly superfluous, whilst being strikingly understated. In a way it reminds me of the flâneurs of nineteenth century Paris combined with a novel distinction between past and present, which was drawn by the Teddy Boys in a reactionary way.

The Teddy Boys invoked a style, worn by their parents and grandparents well within living memory; therefore the aesthetic can be admired as an adoption of the past to summon a future. Certainly this was a modern twist, for example you might note that in many pictures the “Teds” have their socks purposely visible, nonetheless the adoption of a preceding culture must have made an important statement of ends; indeed the Teds have been frequently singled out as the first generation of “teenagers” as youthful consumers of style and goods, clearly signified through the investment made by participants in their distinctive appearances.

But what hope for the girls? Well, there were “Teddy Girls”, a less publicized group; the Judies, as they were called, whose style also alluded to the Edwardian era. Young working-class Judies, and Teds, both spent much of their income on maintaining their various styles. The girls, I have to say, I particularly like. The contrast between “masculine” and “feminine” in the images that survive of them offers an interesting comparison with the androgynous styles that consistently feature on contemporary catwalks. Skirts, tailored jackets, antiquarian accessories and cropped trousers combine to produce a style of dress with real personality behind it. In particular the hair, slightly more versatile than the Teds, provided numerous opportunities. Updating this look for today the modern Judie could mimic the “male” styles, update the contemporary ponytail or, if she has the time, endeavor towards a steam-punk styled, thoroughly Edwardian, up-do. The last would be my preference, if I had the hair or the time, and if you possess the necessary dark curls then please consider yourself entreated to clash them, in a messy bun, with an appropriately masculine blazer.

Now I don’t endorse the violence; and there was certainly violence as Teds became increasingly implicated in a variety of riots and gang clashes throughout the 1950s, but the aesthetic offers us an interesting point of reference. In the current economic climate it is tempting to seek some respite through consumption and vintage offers one, albeit increasingly expensive, avenue of attack; furthermore one only needs to glance at the Autumn/Winter collections for the past couple of years to see the stylistic influence of wartime austerity; set a couture prices. So steal clothes from your parents’ wardrobes (did I say steal? I meant liberate), or investigate the rails at your local vintage haunt. Given the current heat it may be best to wait, but if you’re seeking to make a statement and have fun with fashion once the weather turns, as I suspect it will, then may I humbly suggest that you experiment with a little bit of Team Edward this year. 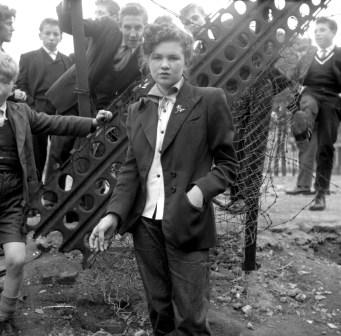