I’ve always been a pretty big gamer. Videogames were something that interested me from childhood, and I’ve been passionate about them ever since, watching YouTube videos, Twitch streams, and playing a fair share too. That’s why when my friend told me about an eSports bar that opened last year in London, I had to go.

Initially, I was quite surprised at how small the bar was – quite honestly, I expected a bigger interior than the undersized single room I was faced with. However, once you get past the lack of seating arrangements, you start to realise that for its size, it has quite a lot to offer.

On a raised platform sit five gaming PC’s. I didn’t get a chance to look at the specs, but judging from some of the rigs and peripherals, they have sponsors from XMG and Logitech. Two of the five are hooked up to dual monitors, one for the player, and one that broadcasts their screen for the rest of the room to admire. Aside from that there were at least five more widescreen TV’s in the room, as well as two Xbox 360’s and a trove of Wii’s, Gamecubes and more that you could pick up from downstairs and set up yourself if you wanted. The live streaming itself was constantly broadcasting, showing the StarCraft World Championships among other things. Whilst the next gen consoles might have been missing, they would be expensive to maintain with the few games currently available, and as the bartender said, most of the demand was for the older consoles anyway. 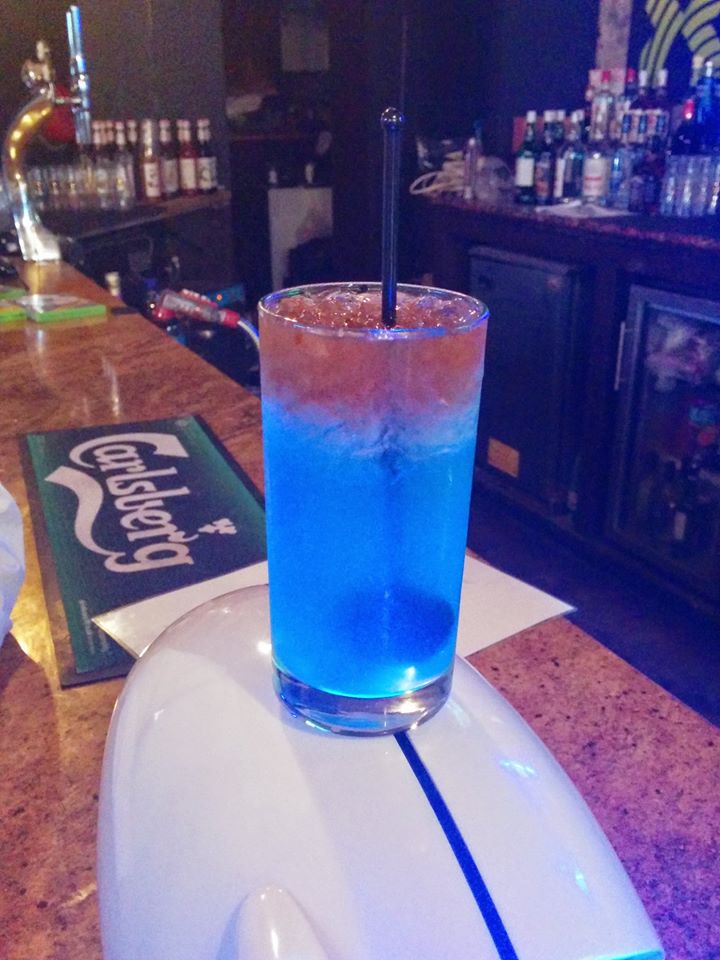 The drink prices weren’t terrible, I guess. £3.50 for a pint of Carlsberg, pushing £4 for any of the other lagers or ciders. Mixers were around £3.60 for a single and significantly more for a double. There wasn’t a huge variety on tap, and prices were perhaps a bit high on average, but respectable for a smaller, specialised pub.

What was most interesting was their cocktails, being offered for five pounds after a certain time. Each had a gaming theme, my personal favourite being the green and blue ‘Stimpack’ in tribute to Fallout, whereas some were named after characters, skills and abilities.

Without a doubt the atmosphere was the best thing about Meltdown. At first we sat on our own in the centre of the room, feeling out of place in the regular crowd, even though we shared similar interests. Computers were being played diligently with small chatter here and there while we stared awkwardly at the pulsating glass League of Legends sign.

However, once we got past the initial awkwardness and plucked up the courage to venture over to the consoles, things picked up. The people I talked to were enthusiastic, kind. I was offered a game almost immediately, and declined simply for the pleasure of watching my friend get completely annihilated at Street Fighter IV. Although there was the odd pro, the majority of people there were casual gamers, and all were welcoming even to those who were complete noobs.

I was shocked mostly by the sense of community. There was clearly a high level of trust around – with people’s phones left charging unattended, and controllers kindly left overnight for others to use. Left right and centre people were discussing the finer mechanics of Smash Brothers, or sitting at the table playing Magic. The staff themselves were clearly passionate about games also, unafraid to join in discussions or watch people play, sporting gaming t-shirts.

As somebody who lives a half hour train journey from London, it was worth the trip. The whole thing was a little less impressive than I was expecting, but at the end of the day I enjoyed myself, and may go back on the very odd occasion. However, it’s not something I would travel across the country for. The £20 train ticket was enough to make me hesitate when thinking about going there again, and chances are you’ll be disappointed by the small scale. There are some nice facilities, interesting drinks and a good atmosphere, but at the end of the day it’s a pub with a good crowd, not a once in a lifetime experience.

Address and more information can be found on their Facebook page here.