Why ‘Man vs Food’ should come to Europe

After spending a year split between the Rhineland and the Atlantic coast of Spain, one thing I’ve learnt is there is some incredible food around if you know where to look. In Germany, I learnt to love pigs’ insides; in Spain, slimy sea creatures and more pigs’ insides. Galicia, Spain, has a very fish/seafood-based cuisine with lots of crusty bread on the side, while in Germany it’s far more acceptable to eat a durum kebab wrap in the middle of the day than you would believe. Hungarians, I’m told, have a proverb that goes “we don’t live long, but we eat well”. Long story short, a lot of European food is delicious, and a lot of it’s quite weird.

I’ve thought for a long time that an international Man vs Food would make a lot of sense, though perhaps it’d have more in common with Adam Richman’s new show, which is based around unique and interesting food rather than sheer gluttony. Either way, here are a few that would have to feature as the basis for episodes:

1. The Kapsalon from Rotterdam isn’t exactly restaurant fare. Dutch for hairdressers’ shop, this dish is a combination of lamb döner or shawarma meat covered in cheese and a variety of sauces. And salad, of course, because without any salad it wouldn’t be healthy. The sauces combine with the meat juice to make the chips on the bottom into a soggy mess. Delish. 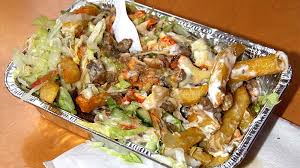 2.Another middle Eastern adaptation nourishing hungry Europeans, the Lahmacun is sometimes called a Turkish pizza: as a thin, flat bread dish, rolled out and covered in lamb mince and tomato sauce, you could incorporate more or less anything. The potential for gluttony is immense.

3. No series of Man vs Food would be complete without a heat challenge. Imagine the cheapest frankfurter you can find, smothered in BBQ sauce so sweet it hurts your teeth, added to the knowledge that the different sauces on offer are in fact the same thing with differing amounts of chili powder, which is added at the last minute. That’s a Currywurst. Germans are notoriously uncomfortable around spicy food, so it’s not a bad idea to choose the hottest one available and watch their amused anticipation change to confusion when you’re unperturbed. 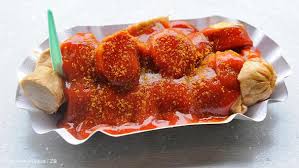 4. Literally “liver cheese”, Leberkäse is much tastier than it sounds. This meat loaf is made of calf’s liver and served with cold potato salad, mustard and half a liter of beer. 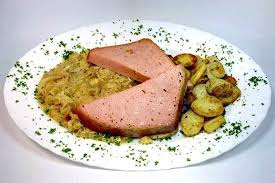 5. After all the meat, a pudding seems to be on the cards, and of all the German cakes, the Butterstreusel is by far the guiltiest pleasure. Crispy on the outside, soft and buttery just short of being greasy, this lump of stodge can come with or without icing or berry compote, and the portion sizes are fit for Obelix.

6. Brussels mussels- this rhymes in English, but not in French, nor Flemish, as far as I know. I’ve never really understood it, given that Brussels isn’t near the sea, but go there and you’ll find whole streets of restaurants offering this, all for exorbitant prices. Again, beer is essential. 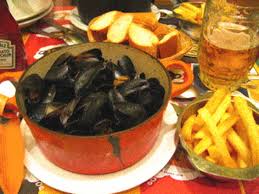 7. Speaking of seafood, no trip to Northern Spain is complete without a plate of Pulpo a la gallega,  (Galician-style octopus), which mean diced with what look like garden sheers, boiled in a pot and cooked in chili or pimentón. Afterwards a spicy oil is left over for dipping the crusty bread in. 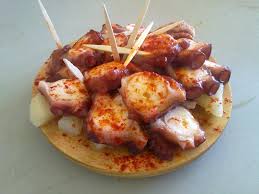 8. Porto is one of Europe’s hidden gems, and the Francesinha is a fantastic brunch after a night’s drinking or late lunch after a long journey. Wikitravel describes it as “toast with layers of meat inside (beef, pork meat, ham…). It is covered with cheese and a spicy sauce, with the option of including french fries on top. Most importantly, this dish must be accompanied by beer and not wine.” I ate one of these in Porto and it had steak, sausage, ham and chorizo, with a fried egg on top, chips and a sauce the consistency of tinned tomato soup. The café offered a standard or a deluxe version. The difference? The deluxe version came with mushrooms. Even the locals admit that it’s only fit for special occasions, and we doubt that little French ladies that it’s named for eat these very often.