Based on a quirky Japanese CGI animation called “Gregory Horror Show” and developed under Capcom.  Released 2003 for the Playstation 2 system. The game was released in Japan and Europe but not in North America. Which explains why it didn’t really get the recognition it deserved at the time. There are only a handful of let’s plays for it on Youtube. Which I encourage you to check out, but it’s great to see the game kept alive and introduced to enlightened players by loyal fans. 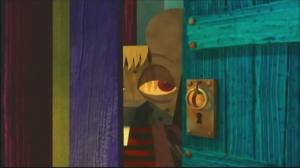 “Have a pleasant sleep my friend. You’ll be needing it. Believe me…”

The game begins as your character is lost in a forest and stumbles upon a mysterious hotel named ‘Gregory House’. Your character takes shelter in Gregory House and is met with it’s freakish manager ‘Gregory’. A anthropomorphic, cube-headed mouse who swiftly prepares a room for you. You can choose whether you wish to be a girl or boy character and your name. Gregory then escorts you to your room. It’s clear from the get go that this isn’t a comforting place and holds an overwhelming sense of a foreboding nightmare. In your room, you fall into a deep sleep and are met with a strange incarnation of Death in your dreams who quickly establishes you can’t leave the hotel and cuts a deal with you to collect souls in return for freedom from the shackles of the hotel. You awake to the sound of someone screeching. It’s ‘Neko-Zombie’. A zombie cat who is in the room next to you. Neko-Zombie talks with you and divulges about Gregory and the other guests who plan on keeping you imprisoned in the hotel for all eternity. Neko-Zombie acts as the tutorial and teaches you all the skills you will need to help you in your struggle. Once completed, Neko-Zombie gifts you with your first soul in a jar to give to Death. 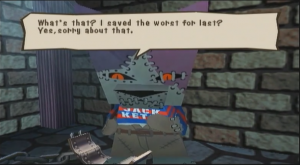 Neko-Zombie explains the situation and sets you through a tutorial

You’re certainly not the only one in the hotel, they’re various insane guests that are also staying in the hotel and will appear during different chapters. Each new guest is introduced with a CGI cutscene reminiscent of the TV show. The game is split into multiple chapters in which you will deal with each of the guests who appear for that chapter. A few notable characters include, ‘Catherine’ a lizard nurse with a fetish for draining blood from her victims. ‘Judgement Boy’ A set of scales who moves around the hotel by a rail system connecting to the ceiling, he bestows questions about hypothetical situations where the participant must choose between money or love. And ‘Hell’s Chef’ The chef of Gregory House who appears as a wax candle complete with a flame and hates people who criticise his cooking.

The central mechanic of the game is about stealing the souls that lay in the other guests possession. You must study each guest meticulously as each one has their own rota of activities you will find them participating in each day. Each guest usually has a weakness of some sort which you will need to uncover so you can steal their soul while they’re incapacitated or unaware. However, once you have stolen their souls, they will be on the look out for you to take it back and punish you. This becomes increasingly different measure to avoid certain guests as more and more inhabit the hotel as the chapters go on.  Each guest has they’re own way of inflicting damage on you once they’ve caught you. Some just take away health but some will leave you with annoying illnesses to deal with and eventually be forced to cure.  One illness in particular which turns the controls upside-down to disorientate the player.

You have the ability to peek through keyholes, but don’t let anyone spot you doing it or they will abruptly stop you and question your actions. You will be warned when a dangerous guest is in the vicinity by your on screen character’s senses and you will be forced to flee if they discover you. Items and power ups can be used to aid your escape but you are forewarned to use your items wisely as it becomes a scavenger hunt, tracking down desperately needed items. Gregory’s little nephew ‘James’ will playfully stalk you, especially during a bad moment, and could give away you position to aggressor guests near by.

It often becomes a game of cat and mouse, checking the map for certain characters whereabouts, pre-planning and making sure you don’t end up running into them. A strategic mind-set often comes into play to dodge guests and make sure you’re carrying the right amount of items for any eventualities that may occur. There’s also a small shop called “Gregory Shop” which becomes available to buy and sell items you find throughout the hotel. You can even collect trading cards printed with the guests of the hotel and they’re ratings of rarity.

Gregory Horror show mixes elements of survival horror, taking staples from Capcom’s infamous Resident Evil series in the form of herbs as healing items, reading books and sleeping.  Your life gauge or sanity meter depletes over time and it’s your job to keep an eye on it and make sure it never completely disappears or it’s game over. Items you pick up and have no use for at that moment can be stored in a chest in your room and can be taken back out later if needed.

The game is chocked to the brim with Easter eggs and back-stories on the various characters for you discover through spying on the guests or just carefully looking through an area. There are also many references to the TV show it is based on. Gregory Horror Show dabbles well in comedy, often inside jokes about the characters and their habits and relationships. Catherine has a thing for Hell’s chef for example, which you can discover by looking in Catherine’s room.  This makes the characters all the more sympathetic and extremely likeable. The same dark humour selling point found in the TV show is also present.

The game is first and foremost a single player story but there is a welcome option of two player for the roulette challenge mini-game once you have unlocked it.

Gregory Horror Show might not be for everyone, due to the fact that it is quite stealth based and not everyone is a fan of the genre but if you’re a big fan of survival horror, then you should definitely give it a try. Fans of Resident Evil should find the item system very familiar. The peculiar characters alone should warrant a play-through as it can be very entertaining to watch them go through their routines.  Not all the text is read out through the voice acting too, which is a shame but it is often similar with most Japanese RPG’s to make you read the text out yourself. Sniggers and exclaims are used over important speeches which don’t have voice acting so it’s always clear what dialogue is important.

Gregory Horror Show: Soul Collector is quite a rare game. Especially with no release outside Europe and Japan. So copies can be quite expensive to obtain. It’s absolutely worth it though just to play something extraordinarily different to most in the survival horror genre or indeed any recent game on the market. Even if it is a little old but it still holds up well due to not overly complicated story and quite simplistic animation-style graphics.