La Liga has long been a hotbed of technically gifted revista’s that dictate the passage of play in a patency that British football struggles to grasp. Gordon Strachan went as far to say that ”we are too impatient culturally and that we want something immediately”. Go to any match in the four tiers of English football and you will see somebody berating a player for holding onto the ball too long or failing to find a team mate. This is not to say that we cannot play the game that was created in England any better than the Spanish, more that we must adjust it if England, Wales, Scotland and Northern Ireland are to flourish on the world stage.

The figures regarding the goal tally in the three leagues is interesting, not just as a scale of entertainment value. Turning up to watch your team on a Saturday should be accessible to people of all incomes. In Germany it costs 23 euros on average to watch your team which is around £18 I am amazed to say. Eighteen pound to watch an effervescent team under the guidance of a manager that is as passionate as the 80,000 fans that cram into the illustrious …arena sounds brilliant value.  The cheapest season ticket is £160 with the average match day ticket costing just sixteen. Arsenal fans can look on in envy at the prices their German counterparts have to pay to watch a team that is a damn site better to watch, putting this across in their demolition of the Gunners earlier this year. The gunners season ticket costs over a thousand pounds which is why they are entitled to bemoan their sides lack of competitiveness more than most.

This week see’s the Champions League return to our screens and already we are contemplating if the Premier League Champions are set for another early exit. Liverpool meanhwile, face a hefty task of defeating the current European Champions. The best bet for an English winner comes from SW6 1HS and Jose Mourinho’s men will certainly overturn Maribor.

Which league can lay claim to the stars of the future? 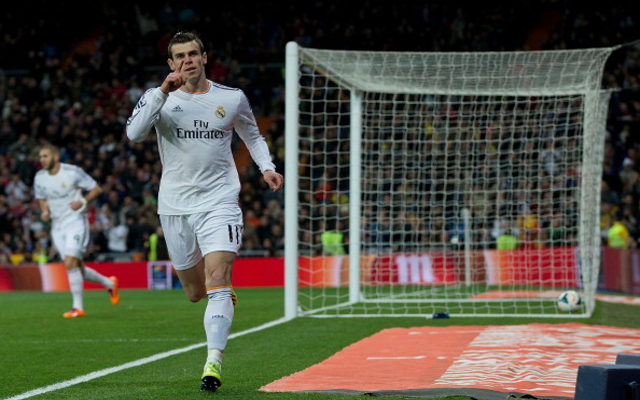 The era of the Galactico’s has left many of Real Madrid’s youngsters in the wilderness, reliant on cup appearances to prove their worth. One player who is destined for greatness, however, is Jack Harper. Jack who you might ask? He is a seventeen year old Fuengirola on the Costa Del Sol twenty years ago with his family from Barrhead in Scotland. Already he has scored in a youth cup win against Basl last month his former coach has no doubt that he will grace the Bernabeua as a first team player. Santiago Sanchez states that “He has a lot of talent and, while he has a lot of developing to do, I really believe he will play for Real Madrid in years to come,”.Harper shone for the Madrid kids against Basle in the UEFA Youth League last month, scoring once, hitting the woodwork twice and forcing the keeper into a couple of smart saves in a 2-0 victory. 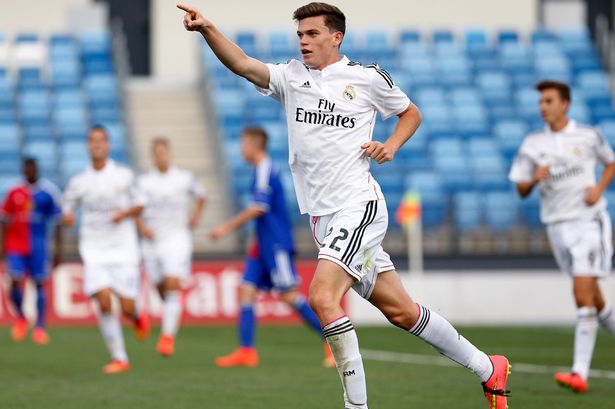 I couldn’t mention a Real Madrid youngster without mentioning a catalan one and that brings me onto the next star of the future. Heralded as the next Luka Modric with similarities with Messi, it is testament to the quality that Alen Halilovic is held in. The left footed midfielder stands at 5ft 7 and skips past players in the way that Jack Wilshere does for Arsenal but can unearth subtle passes in the way that Xavi and Iniesta have done for years. The comparison to Modric is based primarily on his stature and similar appearance to the Real Madrid and fellow Croat midfielder. I  would state that if I was to compare him to anybody it would be David Silva of Manchester City. Like the diminuitive spaniard he glides past players looking for the killer pass although the defensive side of his game needs work. Work that could be unhinged on Wearside with Sunderland. No this isn’t a joke, the Premier League basement side are apparently lining up a loan move for him with Gus Poyet said to be interested in adding quality to his attack and Barcelona may want to do a deal as they did with Delofeu last year. 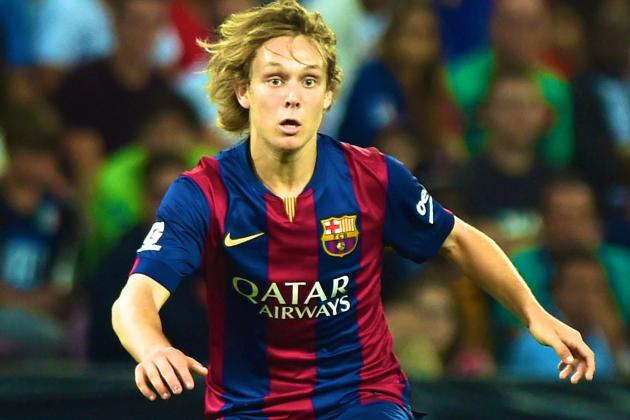 Bavaria is known for celebrating Oktoberfest in style and if securing the signature of Sinan Kurt isn’t enough to get Pep Guardiola donning the traditional outfit and downing beer I don’t know what is. The blonde haired attacker resembles Andre Schurrle and has the shooting statistics to back up such a billing. Last August, just weeks after his 17th birthday, his shooting strength was clocked at 119km/hr.Kurt’s hat-trick against the Israel under-18s in December demonstrated his prowess and agility in turning the defenders on numerous occasions. 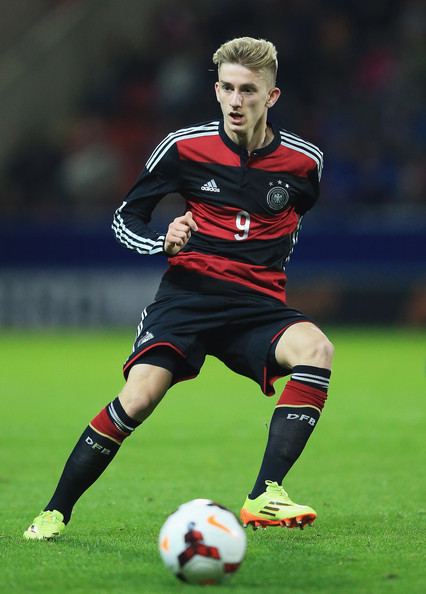 When pundits lavished praise on Germany’s world cup triumph, it wasn’t so much an admiration of that team alone but an admission that Germany is operating correctly.

The budgets of Bundesliga sides is considerably less than that of the Premier League and La Liga so academy propsects are given an opportunity. Radical changes were made to the way Germany’s academys operate in 2002 and it was this that led to the side that lifted the World Cup having an average age of 24.7 years. Now who said you don’t win anything with kids? hmm.

Like Mesut Ozil and Lewis Holtby that left before him, Max Meyer (see below Schalke image) could be tempted by the lure of the Premier League. Currently at Schalke, his rise to stardome has attracted the likes of Liverpool, Arsenal and Chelsea amongst others.

His 2011/12 season as a whole was phenomenal though, scoring 24 goals and assisting a further 17 in all competitions, a remarkable record considering his position and age.

Later that year, he was awarded the Fritz Walter Silver medal in his age group, a distinction extended only to the country’s best young football talents.  Overall he has scored nine times in the 18 games for the U-17s and is expected to become a key member of the various youth teams as he progresses through the ranks.

At present he has notched an impressive 11 goals in 15 games for the u19’s from attacking midfield and was taken to Schalke’s first team training camp in Doha during the winter break during which he featured in an exhibition match against Bayern Munich, a match he impressed in too. Schalke head coach Jens Keller lauded the youngster after the game, “You don’t expect in a game like this against an opponent like this to play the ball the way he did.”

A low centre of gravity and great close ball control that is reminiscent of Mario Götze has left future Germany teams with an embarrassment of midfield riches. Meyer’s strengths are his technique and football IQ. He is good with both feet and links play well with those around him all while having a great nose for goal.  Meyer says he models his game after his idol, Lionel Messi, “He is my role model. I can learn a lot from him.  He is the best player in the world and always remains humble.” Ironically enough,

Ironically the next person on my list is ”the next messi”. Everytime this statement is made the sound of a football fan chuckling sarcastically is never far away. The likeness for the Barcelona phenomenan is clear to see in Manchester City prodigy Abdelkader Diaz (below image) and has been since the age of 12. Subsequently it came as little surprise to see the La Liga giants try to snare him from the clutches of Malaga and Manchester City in 2012, only to be gazumped in their efforts to do so. They even went as far as sending Iniesta to Malaga to broker the deal. This led to nothing however and Manuel Pelegrini’s relationship with the club paid dividends.

I would urge anybody reading this to head to Youtube and watch the 15 year old’s video against Messi’s and make your own mind up. The pair are an age away from the quality on Hackney Marshes, that’s for sure. 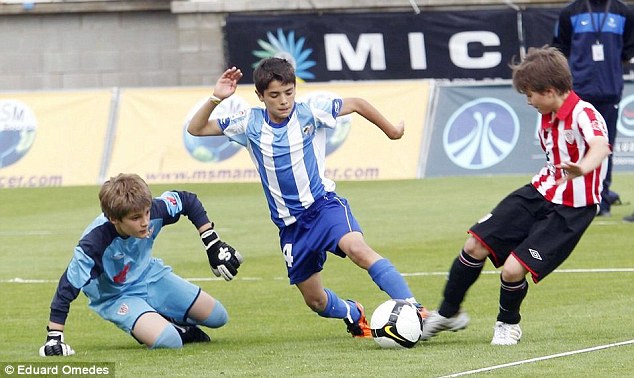 Irrespective of the fact he is plying his sport in League One, Dele Alli won’t be for much longer due to ongoing discussions with Liverpool and Mk Dons.  The midfielder started 37 of Mk Dons matches last season and scored seven goals after making his debut as a 16 year old.

Speaking in March, MK Dons manager Karl Robinson said: ‘He is one of the most gifted 17-year-olds this country has ever seen.

‘I’ve said from the word go, he’s as good as it gets and he’s the best young player I’ve ever worked with.’

The 18-year-old played 82 minutes as the Young Lions beat Belgium 4-2 to make it three wins from three to assist the u19’s in finishing their qualifying campaign in style.