Bully. Developed by Rockstar Games and originally released in PAL regions as Canis Canem Edit on Playstation 2. The media didn’t like the fact you played as a “bully” but in fact your character actually works to bring peace and harmony between the schools volatile factions, through violence admittedly but bullying was not what the game was about. Yes you can choose to bully people if you want such as dish out wedgies or beat other students up but you will be punished for it. Prefects will hone in on your position and take you down. You will then have no choice but to complete the detention tasks which will got longer and more strenuous the more you are caught committing unlawful acts. These tasks usually involve cutting patches of grass on the school grounds and filling up a percentage meter. Bully still stands up great today and is still worth playing years later.

You play as Jimmy Hopkins. A troublesome kid who has been dumped on the doorstep of one of the toughest schools in the country. Bullworth Academy. Rife with bullying or “school spirit” if the headmaster Dr Crabblesnitch is to be believed, and corrupt teachers. The minute you take your first steps through the schools courtyard, you already attract attention from a gang of big brutish kids who cry “You’re dead, new kid!” . A fight erupts. A kid the size of a fully grown adult pounds his chest like a gorilla and charges at you. Mr Hattrick the maths teacher quickly appears to break it up. Saved by the bell. Your first impression of Bully is that adjusting to this place isn’t going to be an easy ride. A little later you meet a mentally unstable student called Gary who befriends you and shows you around. You are introduced to the main factions to be found dominating Bullworth. Jocks,  Bullies, Nerds, Greasers, Preppies. Each later to be taken on and beaten in individual chapters. 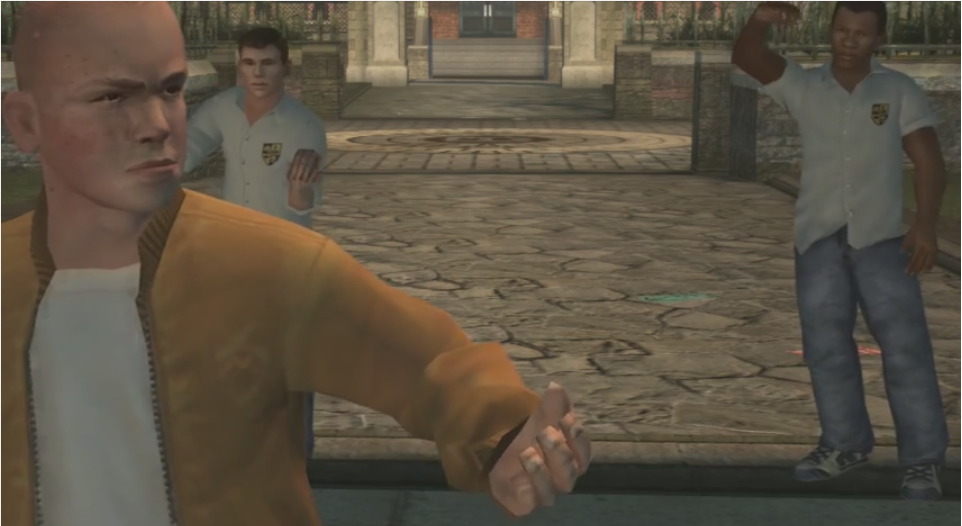 Jimmy finds himself surrounded by bullies

So Bullworth is your typical idealised American school. Complete with it’s own American football team and mascot. Each gang hangs out in different areas of the school. The Nerds hang out in the library, the greasers in the auto-shop, the jocks around the sports facilities etc.

Missions involve lessons consisting of subjects such as English, Maths, Geography, etc which can be completed for rewards. You will be seen as truanting if you do not attend the lessons and will be forced to attend if you are caught free roaming during this period. As daft as it sounds, the lessons are actually rather fun to complete. Often just simple puzzles to complete within allotted time. There is even a lesson for PE which is games of dodgeball or wrestling.

The music for me has to be one of the greatest soundtracks ever made in a videogame and has to be one of the most underrated and under appreciated. Every track is great and extremely memorable well after you have completed the game. In fact, I’m listening to it right now as I write this piece. Tracks being mostly a  mix of funk, electronic and synth. The soundtrack was created by Shawn Lee who also happens to be the composer for The Getaway soundtrack. So certain tracks might be recognisable as having a certain sting or section in them that was also used in The Getaway’s soundtrack. Every clique has it’s own particular theme so you always know who you’re messing with. The greaser’s music inspired by 50’s rock and roll for example or the nerd’s music sounding like retro videogame music. 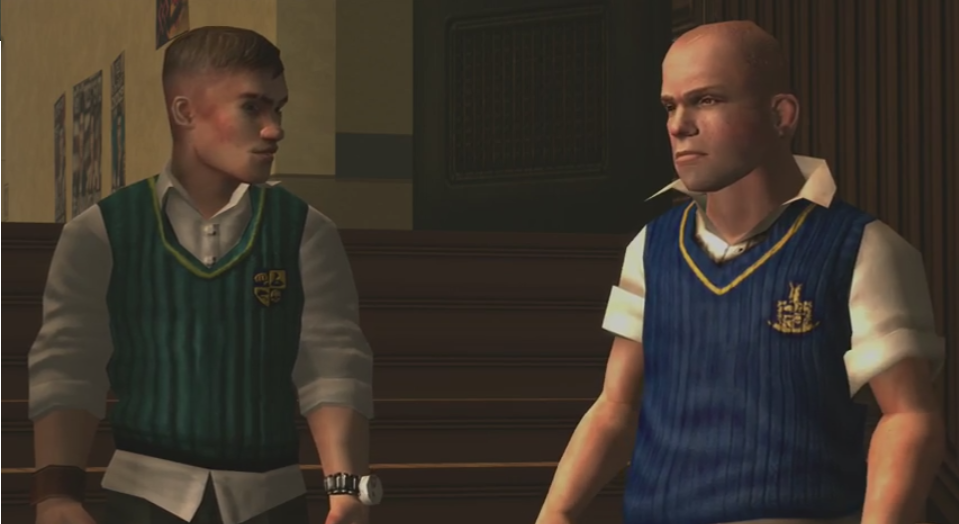 Gary introduces Jimmy to the cliques that inhabit Bullworth

Later in the game, you will be open to explore the whole town outside the school grounds which holds a boxing gym for the preppies, comic shop for the nerds to name a few and even a carnival complete with attractions to see and do.

You have many items at your disposal and modes of transport you can take. A slingshot which you can aim at people and take them out with quite succession. Marbles which you can throw on the ground and multiple enemies will trip over aiding your escape or for use in pranks.  And many, many more. Jimmy obtains a skateboard after one mission which you can use as a faster way of getting around. Bikes can be bought from bike shops, even clothes can be purchased and haircuts to personalise Jimmy. You can even buy flowers and chocolates to win over a girl and receive an outlandish kiss. This is a Grand Theft Auto style sandbox set in a school. 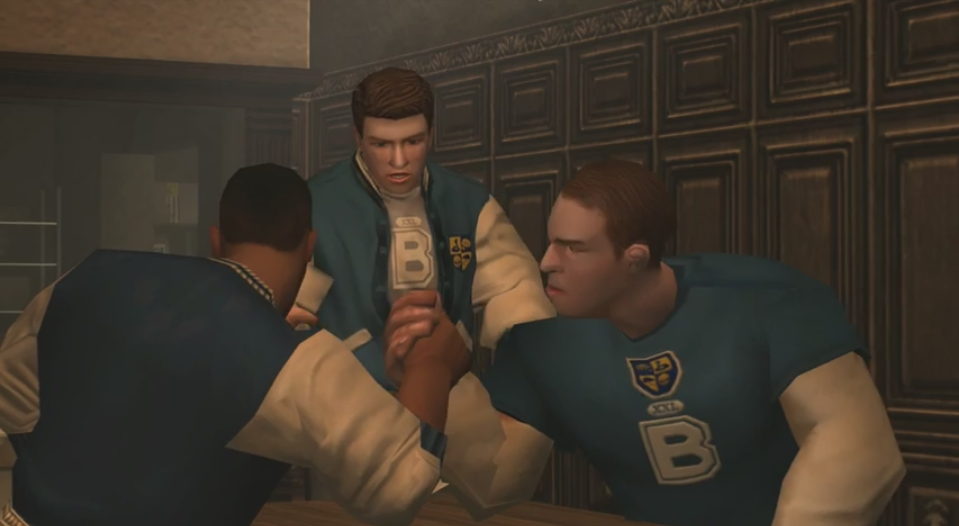 The possibilities with Bully 2 are endless. What if it was set in a college? It could handle more grown-up subjects while keeping the same aesthetics and gameplay as the original. Seeing the levels raised with Rockstar’s most recent exploit Grand Theft Auto V, it’s only safe to assume Bully 2 would borrow from it’s extensive successes. In the original Bully, you can’t drive cars. Primarily because Jimmy probably  isn’t old enough to get behind the wheel. But in Bully 2, if Jimmy was a bit older, he could hijack vehicles. He could modify his own car or race cars round the streets and be thrown in jail and forced to do jail time instead of just detention. Problems would likely arise again with the topic of bullying, especially considering how much more realistic the graphics would look, but I don’t believe that it would phase Rockstar much. As controversy brings free publicity after all. It would be great if the same individual who made the original soundtrack, Shawn Lee, could make the soundtrack for the sequel. And would we even see a return of Hopkins?  Perhaps older. Or would we see an entirely new character?

There have been numerous reports of Bully 2 being in development throughout the years. Some of the most credible news being Rockstar’s Dan Houser claiming he would still love to make another Bully game. A trademark was filed back in 2013 for Bully Canis Canem Edit. Musician Shawn Lee was interviewed in 2009 and mentioned that he will be scoring the soundtrack for Bully 2 but this was a long time ago and we haven’t heard much since. Rockstar have came out to say time again that it has not been forgotten. Rockstar are no doubt working on something and now would be the perfect time for a new Bully game. To test the waters of this new generation so to speak. It’s the perfect time to make a new IP or bring back a less well known one while console sales for PS4 and Xbox One are still in the early stages and still growing.

While perhaps not being a massive success for Rockstar, Bully has a great, well deserved fan base that will most definitely appreciate another offering in the franchise.

I still reserve hope that a new Bully game will be announced next year. Are you dying to see a Bully 2?

Let us know your thoughts in the comments