Barclays Premier League Round Up Week 3

We start this weeks round up with Everton vs Chelsea. Everton enjoyed an impressive last season, finishing in 5th place, and qualifying for Europa league football. However, this season couldn’t have got off to a worse start. After three games, they sit in 17th, still looking for thier first win of the campaign. This week they were humiliated by losing 6-3 to the all powerful Chelsea. Costa (left) bagged a brace for Chelsea, and the rest of the scorers were Ivanovic, Coleman (og), Matic and Ramires. Mirallas, Naismith and Eto’o were the scorers for Everton. In Football, it doesn’t matter how many goals you score if you can’t keep them out at your own end. Conceading more than 2 goals is disgraceful, and as an Arsenal fan, last season I experianced lots of disgrace against the rest of the big 4. I like Everton, and I like the team that Martínez has put together. However, he needs to change something soon or Everton won’t enjoy the comefortable season they enjoyed last year. Chelsea on the other hand, In my opinion are serious title contenders. The question isn’t will they be able to win, its can anyone stope them?

The only goal-less draw of the weekend was Man Utd vs Burnley. Both sides are still looking for thier first win of the campaign.Manchester United were absolutely terrible throughout the first half with Burnley controlling the match, althought the tables were turned in the second half, and Burnley found themselves under heavy pressure at certain points in the game. The only large talking ponits were Di Maria(left)’s debut. Also late in the second half, Ashley Young had a very strong penalty shout as his shot hit a defender’s arm inside the box, however his appeals were waved away by the referee. As I sit here writing this article, United are in talks to sign Falcao on loan from Monaco. However, this won’t solve United’s problems. For starters van Gaal insists on playing a back three of Jones, Blackett, and Evans. Possibly the weakest defence I have ever seen in the Premier League. Also, you can have which ever striker you like up front, but It won’t make a difference when they are being supplied by Tom Cleverly. LVG needs to sort his team out, or he is in danger of doing even worse than David Moyes!

Another team who is struggling at the beginning of this season is Arsenal. The best the Gunners could do this week was to scrap for a 1-1 draw against Leicester. I have news for you Arsene, ARSENAL NEEDS A WORLD CLASS STRIKER. Don’t get me wrong, I think Giroud is a class player, he just isn’t world class. Wenger thinks just because he had one amazing season at Monaco, and he finished top scorer in the French league. He is good, but not world class. As soon as Wenger realises this and tries to sign a world class striker, the sooner Arsenal can fight for the title. Leicester now have their tough start out of the way and can now concentrate on trying to win some of their less difficult games and climb the table a little. However, Arsenal have just completed thie signing of Danny Welbeck. I wouldn’t have him down as a world class striker either. However, he was always unapreciated at United and he has a point to prove. I am excited to see his debut.

Stoke pulled off a shock win at Manchester City. Diouf, the Senegal international and former United striker raced 70 yards before slotting under Joe Hart. He was signied by Stoke on a free contract this summer. Although Man City dominated posession, they were very poor. They had 16 shots, only 2 of which were on target. That is appauling. I would expect those sort of stats from a Championship side, not a side that had just won the Premier League. they also had 11 corners and comitted a lot more fouls than Stoke.  However, City faced results like this last season, and always bounced back. If you are a City fan, I wouldn’t be worried unless Manchester City lose their next game. Then I would start to concern for Pellegrini’s tactics. This was Stoke’s first win of the season, if they can build on this then they will have a fine season.

Elsewhere in the league, Neil Warnock’s first game in charge of Palace was a thrilling 3-3 draw with Newcastle. Palace managed to get goals at both ends of the clock. Gayle (below right) gave the Eagles the lead after just 29 seconds to give them a 1-0 lead, and
Zaha scored in the 95th minute to tie the game up 3-3 and earn Palace a point. Janmaat and Williamson got their first goals for Newcastle too. I have a feeling that under Warnock, Palace will be fine. Newcastle can be tricky customers, and getting a point from them was no easy task for Palace, but they showed character and managed to get a point from the match. Newcastle on the other hand should be concerned. They have had a good team and a good manager. yet they only have 2 points out of a possible 9 to show for thier troubles. This is worrying. The season before last, Newcastle had a late scramble for places meaning that they only just avoided relagation. Could this be a repeat of the 12/13 season for Newcastle?

Liverpool bounced back from their defeat to City last week with a 3-0 victory over Tottenham. This was also Ballotelli’s (left) debut for Liverpool, however
, the Italian failed to impress. He missed a few golden opportunities to increase Liverpool’s lead, but luckily for them, Mario’s missed chance’s didn’t cost them the match. Elsewhere in this fixture Moreno got his first goal in a Liverpool shirt, and Gerrard converted from the penalty spot. Sterling also got a goal for the reds. I will be excited to watch Liverpool progress during the season. For Tottenham however, I predict a similar season to last; winning some games, but failing to turn up when it really matters.

Hull suffered a terrible defeat to the hands of Aston Villa. Tigers manager Steve Bruce said that the first 45 minutes of the match were the worst he had ever seen. 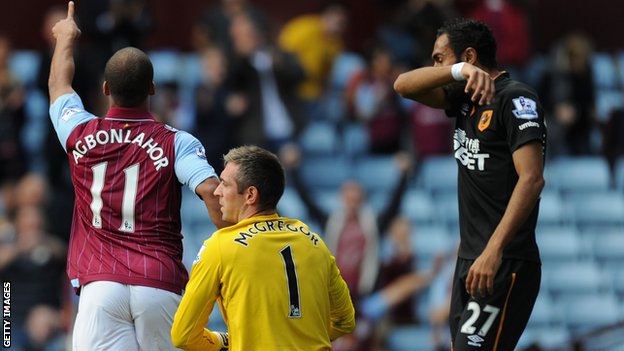 That first half saw Hull conceded twice. One goal was scored by Agbonlahor (left) and another by Weimann. It was Agbonlahor’s first home goal for Villa since 2013. Villa are also unbeaten in the Premier League so far this season, and currently sit in 3rd place on 7 points. quite a contrast from last season. Hull on the other hand are in 9th on 4 points. However, since this match, they have made some major signings in the Transfer market. Abel Hernandez, Mohamed Diame, Gaston Ramirez, and Hatem Ben Arfa come in on either permanent or loan deals. These  players are all quality attackers, apart from Diame who is a quality holding midfielder. These signings are all brilliant and I applaud Steve Bruce for making them. However, I can’t help remembering that the last team to make a large amount of signings (Tottenham) struggled last season as their team failed to gel. However, I have a feeling that these players won’t have the same problem as they all already come from the BPL (apart from Hernandez). If Bruce can get these new players gelled into the team nicely, then I will be excited to see where Hull can strive to finish. 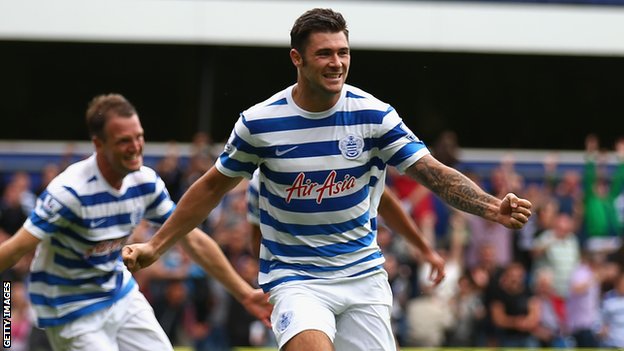 QPR snatched a 1-0 win from Sunderland this week, with Austin scoring the winner just before half time.
He missed a penalty in QPR’s first match of the season, but netted in this match. Austin will now be a prominat figure now that Remy has completed his move to Chelsea. However, Harry Redknapp has made some good moves of his own in the transfer window. To strengthen his midfield, he has brought in Sandro from his former club Tottenham. Other big names include Isla, on loan from Juventus and Caulker on a permanent deal from Cardiff. Sunderland’s main signing of the window has been Jack Rodwell. He was a key player las week against Man Utd, however was a peripheral figure in this week’s fixture. I predict good futures for both of these clubs, however, QPR may have to invest in a new striker if Austin doesn’t live up to his potential.

Now comes the team i’ve been most impressed with at the start of this season. Swansea. This week they beat West Brom convincingly 3-0 to end thier unbeaten start to the season. Dyer (right) scored twice and Routledge scored once to make sure that briefly Swansea moved to the top of the BPL. Swansea are impressive becasue Monk has built a very strong side and they look unstoppable in the early stages of the league, however, they haven’t face any big teams yet. (Yes Manchester United fans, I won’t concider your team to be classed as a big side until Blackett, Evans and Jones don’t feature in the starting line up becasue you have purchased better players.) West Brom on the other hand only have 2/9 points at this stage. they have purchased 11 players, more than any other BPL team this season. This means that they may have trouble gelling.

Finally, Southampton beat West Ham convincingly 3-1. Pelle got his second goal for Southampton, and looks to be on good form for the club. other scorers were Schneiderlin (who scored twice) and Noble scored for West Ham. Southampton finally finding thier feet in the league, and they have done well to plug the gaps that their departing players left. However it could be difficult for the Saints to compete this season as they have a new manager dealing with a largely new squad. It could take a while for the two to gel. however, when they do, Southampton could once again be a force to be reconed with in the league. West ham, on the other hand could be in danger if they don’t continue to pick up the poionts that are there for the taking. However they have done that up to this point and look like a mid table side this season.